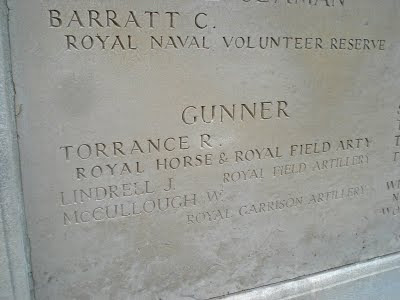 As you walk down the gravel path to the Tyne Cot Cemetery halfway up the Passchendaele ridge, a soft woman's voice reads a name, regiment and age at the time of death. It's a beautiful litany of the 300,000 men who died in the infamous Battle of Passchdaele. Tyne Cot is the largest British and Commonwealth war cemetery in the world. Over twelve thousands graves and an additional 36,000 on its Memorial to the Missing. This truly is the Silent City.

Among the names on the Memorial to the Missing is that of Robert Torrance. Probably Bradford City's greatest defender. The auburn haired centre half was the man-of-the-match in the 1911 FA Cup Final replay. Seven years later he lost an arm during an artillery barrage near the Belgian town of Ypes. The field hospital he was taken to was then shelled and Robert was blasted into oblivion. His body was never found. Today he may still lie undiscovered under a Belgian field, or he may lie in a grave marked simply 'known unto God'.
Posted by bantamspast at 06:26