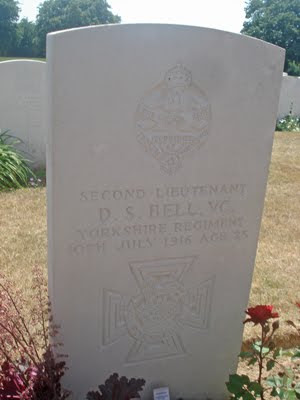 A few minutes drive from Bell's redoubt is the final resting place of Bradford Park Avenue's Donald Bell VC. We walked down a grassy path between ploughed fields into what the troops called the Caterpillar Valley, dominated today by the large Gordon's Dump Cemetery.

Without a building in sight we walked among the long lines of brilliant white headstones. Several wreaths of poppies lay at the foot of Donald Bell's headstone - including ones from Aireville School, Skipton and Donald Bell's former school, Harrogate Grammar.

Undoubtedly, his grave attracts the most attention in the large cemetery, yet all the headstone are of exactly the same size and design; the message being that they fought together and died together, equals in life and death. It was a sentiment that was to change Britain and beyond, for among the battlefields of the Great War our modern world was formed.
Posted by bantamspast at 14:36