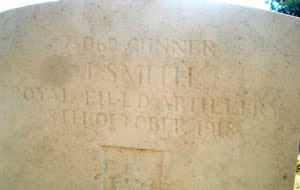 Another remote French village, set in rolling fields of barley, Ramicourt. Situated on the edge of the village and on a rise is the final resting place of Bradford Park Avenue's Jimmy Smith. He was a striker with an incredible scoring rate. Signed to strengthen the Avenue side in the wake of their promotion to the top division, he carried on hitting the net with an unerring regularity. Just a few days before he was due to return home to Bradford to marry his fiancé at Heaton he was killed in action. His portrait hung in the boardroom at Park Avenue as as a reminder of his supreme sacrifice - I wonder what became of it after Park Avenue was demolished in 1980?

Unfortunately, his grave stone is badly worn, but will doubtless be replaced in the near future. As we looked out in brilliant sunshine over the fields of barley swaying gently in the breeze, it was once again difficult to comprehend the slaughter that had occurred in that place. If the cemeteries did not exist the battlefields of the Great War would have already been returned completely to nature. In some ways a sad thought, in others a lovely one.
Posted by bantamspast at 16:37