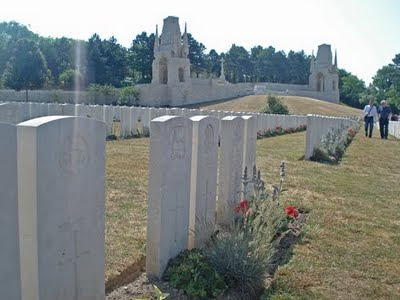 Line after line of brilliant white headstones. Étaples British Cemetery, within sight of the sea, is a poignant place. Here wounded soldiers were brought from the front. If they survived they were placed on a boat for Britain and home. Sadly, over 12,000 got within sight and sound of the sea, and by association, home, before succumbing to their wounds.

Among the rows of headstones is City reserve Ernest Goodwin. He lived on South Parade right behind Valley Parade's main stand. Ernest was badly wounded by shrapnel attacking Thiepval during the Battle of the Somme. He made it to Étaples, but no further.
Posted by bantamspast at 19:59