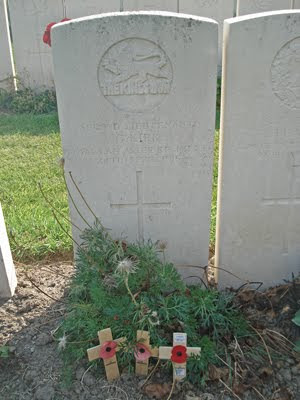 The village of Poperinghe was for British troops a respite from the hell of Ypres. This was the railhead for the infamous Ypres Salient but also a place where bars and restaurants could be visited. For City's amateur centre half Gerald Kirk it was the place he came to die. Badly wounded during the defence of St Julian following the first ever gas attack in the history of warfare, when the German's released poison gas on French colonial troops who ran for their lives at the sight of the yellow gas clouds.

Gerald's company were thrown into a hasty counter attack designed to plug the gap in the line, it was successful but it cost Gerald Kirk his life. Badly wounded he was taken to Poperinghe, but the following day he succumbed and he lies in the Poperinghe Old British Cemetery.
Posted by bantamspast at 06:40