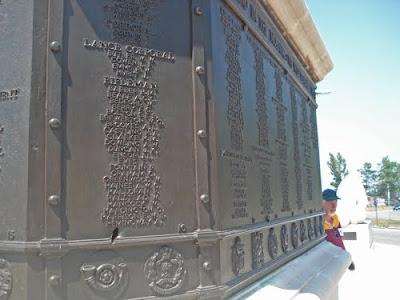 The Nieupoort Memorial to the Missing was unlike any other we had seen thus far. It was situated in the centre of the town, at a main road intersection with trams and canals nearby.

City's first ever England international Jimmy Conlin is commemorated on the memorial. He was quite a character. The first City player to be sent off, only the second ever player in the world to be sold for over £1,000 and he was at the centre of a riot at Valley Parade against Manchester United in 1906.

Sadly, his brilliant career ended with suspension as drink got the better of him. Jimmy was killed in action at Neiupoort whilst serving with the Highland Light Infantry. He has no known grave and is thus commemorated by name on the memorial. The photograph shows bullet holes in the memorial from the Second World War.
Posted by bantamspast at 20:07