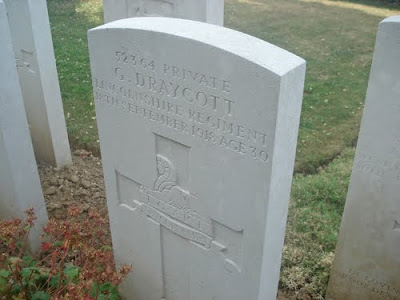 Under glorious skies the final commemoration of Glorious 1911 took place on the Great War battlefields of Belgium and France. No Bradford City supporter will need reminding that the captain and goal scorer in the 1911 FA Cup Final, Jimmy Speirs, was killed during the Battle of Passchendaele just six years later. Thus the centenary of the FA Cup victory was the appropriate occasion to visit the final resting places of the nine Bradford City players who lost their lives in the Great War. Over the next couple of weeks we will feature sections of the journey, along with a commentary and photographs.

Twenty City supporters left Bradford Interchange on a sunny Thursday mid-morning en route to France. One change of trains, a quick dash through the Channel Tunnel and we were in Lille in time for tea. The following day we were conveyed by a Belgian coach to Gauche Wood and the first of the former players George Draycott. He lies in an isolated cemetery among rolling hills with the Gauche Wood as its backdrop. A single tree stands within the cemetery. Looking out over the quiet fields it is difficult to believe that men fought and died in this tranquil place. The tiny cemetery had a powerful impact on our group. Its size and isolation added to the poignancy. We wondered how many visitors had discovered George’s final resting place? Situated up a winding green lane, inaccessible by car and many miles from the nearest centre of population, Gauche Wood is far from the madding crowd. The beautifully tended cemetery, designed, like all the others, to resemble an English country garden, evidently has regular visits from its gardeners, but one suspects visitors are few and far between. If it was my fate to be killed in a war many miles from home, I would be content to have somewhere akin to Gauche Wood as my final resting place.
Posted by bantamspast at 18:57