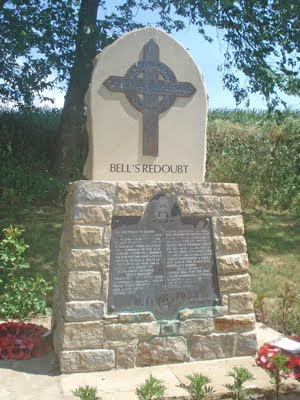 The tall white cross of sacrifice that stand sentinel over every British and Commonwealth cemetery becomes a regular sight. We wind among narrow lanes and suddenly come across Bell’s Redoubt on the edge of the village of Contalmaison.

On the roadside stands a memorial marking the spot where Bradford Park Avenue’s Donald Bell died. He is commemorated because a few days before his death he charged across no man’s land under heavy fire and killed the crew of a machine gun that was decimating the attacking troops. For his extreme valour Bell was awarded the Victoria Cross. A few days later he attempted to repeat a similar act and was killed.

Alongside the memorial was a wreath of poppies from Bradford Park Avenue. It was strange seeing the familiar civic coat of arms so deep in the French countryside; a little piece of a foreign roadside that will be forever Bradford.
Posted by bantamspast at 16:44