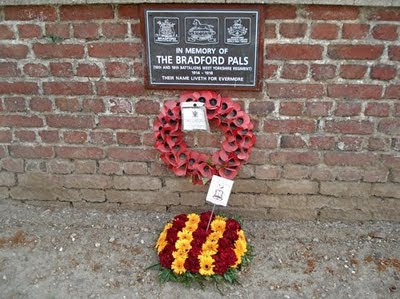 The tiny village of Hebuterne has a plaque on its church wall commemorating the Bradford Pals. The location was chosen because it is close to where 44 Pals were killed in woodland, but it is a couple of miles distant from Serre where the majority of them were mown down on 1 July 1916. The area around Serre has several Pals memorials - Accrington, Barnsley, Sheffield to name but a few, so it does feel a bit odd that the Bradford Pals memorial stands on its own at Hebuterne.

Thanks to Steve Whittaker we were able to lay a claret and amber wreath to remember the Pals who died on the Somme. Both battalions were admitted free to Valley Parade in the days leading up to their departure from Bradford. Their initial meetings took place at the Drill Hall right next to the ground and undoubtedly many of them will have been supporters of Speirs, Torrance et al.

Indeed among the ranks of the Pals was none other than City's most famous player, the England international winger Dickie Bond, fortunately he survived the conflict.
Posted by bantamspast at 20:12