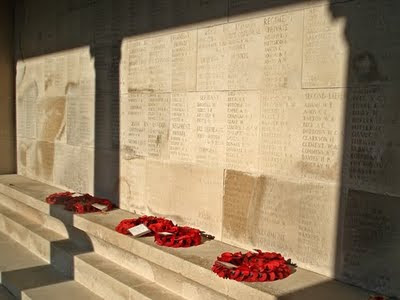 The huge Arras Memorial to the Missing lies alongside a major road just west of the city centre. Once inside the high walls of the memorial the noise of the traffic disappears and once again you find yourself in the tranquility of an English garden.

The beauty and peace of the Commonwealth Cemeteries strikes the visitor time and again. Among the 30,000 names on the Arras Memorial is that of City reserve Harry Potter. A native of Bradford, Harry was living in Girlington with a young family when war came. He died holding the line in the German all-or-nothing spring offensive of 1918. It was the beginning of the end of the 'war to end wars'.

Once the German offensive was spent, the British began a sustained push that rolled the German's back towards their border and eventual surrender. Little compensation for Harry's wife and young daughter left behind in Bradford.
Posted by bantamspast at 20:23