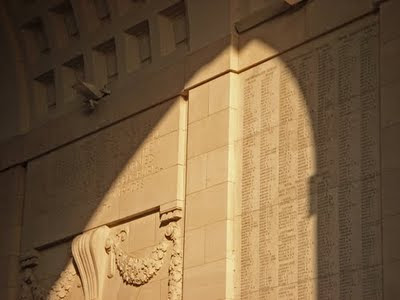 The huge Menin Gate at Ypres has become the site of one of the best known and poignant ceremonies that surrounds the modern memory of the First World War. Every night members of the Ypres fire brigade play the last post beneath the imposing gate on which are inscribed the names of 56,000 men who died in the defence of Ypres and have no known grave.

Among those names is James Comrie, signed when Bradford City gained promotion to the first division and he replaced Gerald Kirk in the team. When the war came James was living in Lincoln, but for reasons unknown he ended up serving with the Northumberland Fusiliers. He was killed near Ypres, but has no known grave. As large crowds gathered to witness the last post ceremony, the traffic was stopped and the bugles sounded their lament, I looked for James' name, but found myself pondering the eleven men whose graves we had visited.

My eyes were then drawn to the endless lists of names on the Menin Gate. I read as many as I could, thinking of the places and lives they had left behind. This is no glorification of war, far from it, there was only sadness and a thankfulness that my generation had not been asked to face the horrors that these ordinary men had.
Posted by bantamspast at 06:45