bantamspast Re-opens in a Book 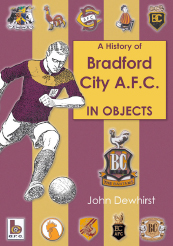 A 330+ page, all colour book; planned publication at the end of September/early October, 2014.

The book records the changing match day experience at Valley Parade and the acceleration of change in the last thirty years, coincidentally since the fire disaster. The content of the book promises to be unique in comparison to histories previously written about football clubs in Britain, let alone Bradford City AFC. This is not a statistical record about players or games, it is literally an illustrated history of the club in objects but not limited to the popular '100 objects only' formula.

A History of Bradford City AFC In Objects has been written and compiled by John Dewhirst who has one of the largest and most comprehensive private collections of BCAFC memorabilia. The book will include items from his collection supplemented with that provided by other collectors and supporters as well as material previously featured in the bantamspast museum. Most of the content has never previously been displayed or included in earlier publications.

John was co-founder of The City Gent in 1984. He previously compiled City Memories in 1997 and has assisted with a number of books about the club including Of Boars and Bantams in 1988, Along The Midland Road in 1996, Glorious 1911 in 2010 and Paraders: The 125 Year History of Valley Parade in 2011. John has also been involved with a number of projects celebrating the history of the club and in April, 2011 he organised the sell-out dinner at the Midland Hotel to commemorate the centenary of the FA Cup triumph.

Profits from the sale of the book will go to Bradford City AFC. Proceeds of badge and book sales will fund historic displays in Valley Parade to keep the club’s history alive and accessible.

Ordered copies can be collected from Valley Parade either at a launch event (tba) in the 1911 Club or from reception. Copies can be posted to those unable to collect in person.

We are also promoting a number of limited edition badges. These are strictly limited to one each per person. The badges will be posted separately to the books.


Payment can be made by paypal through prior arrangement. Otherwise please make cheques payable to bantamspast.