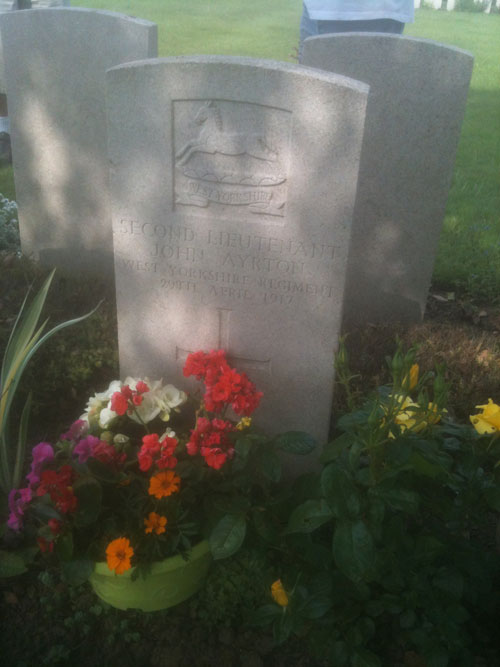 And so the fourth annual bantamspast trip to the battlefields of the Great War is over. A party of twenty-six travelled around northern France in glorious sunshine, paying another pilgrimage to recognise the sacrifice and tragedy of those lost fighting in what should have been the war to end all wars.

The poignancy of locations such as Vimy Ridge, now a Canadian national historic site, where 3,598 Canadians lost their lives taking the strategic ridge, or France’s Notre Dame de Lorette Cemetery where 22,970 French soldiers have found their final resting place, is impossible for even the most casual visitor to ignore. However, equally effecting are places such as the tiny British cemetery at the village of Ors where Wilfred Owen, one of the greatest war poets, is buried, or the Le Trou Aid Post Cemetery, the beautiful last resting place of three Bradford Pals.

At many of the locations we visited research by members of the group ensured that we were able to pay our respects to Bradfordians buried so far from home. Their surnames and the streets where they lived were familiar to us. From Exeter Street to Leeds Road; Manningham Lane to Toller Lane, we stood and remembered our fellow townsmen. The one Bradford City link came at Bethune where we visited to grave of John Ayrton, the son of Bradford City’s first ever chairman Alfred Ayrton. We were asked by his niece (Alfred’s granddaughter who still lives in Manningham) to lay flowers at his grave. We were delighted to do it and remember a man whose father helped found our football club and even came up with the name ‘Bradford City’.

Next year we begin to enter the period where the centenaries of the deaths of the nine Bradford City players killed in the Great War begin. The first will be Gerald Kirk, who died on 24 April 1915. We hope to be at his graveside in Belgium one hundred years to the day after his untimely death.