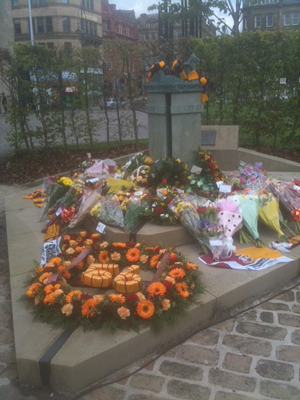 As the Town Hall bells boomed out eleven o'clock, the sky began to cry gently onto the crowd gathered around the memorial to the Valley Parade fire.

The light spots of rain were almost a physical expression of the pain still felt twenty-nine years on from the afternoon when fifty-six people did not come home from a football match. The rain drops also reflected the quiet dignity that has marked the public way that Bradford has long dealt with the aftermath of the terrible tragedy that befell us on that sunny May afternoon.

In the year that the world begins to remember the centenary of the Great War, it is perhaps appropriate to reflect on the fact that how the Bradford fire is remembered will inevitably change.

Personal communications have been transformed in recent years. Today we have instant communication. In the aftermath of the fire people queued to use telephone boxes to let relatives know that they were OK. I was standing in the Paddock that fateful day and until I walked into the house my family had no idea if I was alive or dead.

Today we can hand out praise or condemnation in an instant. Those opinions will be read by thousands, potentially millions, in the blink of an eye in all parts of the globe. Our brilliant ideas, and our very worst, are there for all to witness. We can judge and be judged in an instant.

The Bradford fire used to be publicly remembered once a year at 11am in Centenary Square. Today it can be remembered by websites and social media and shared by millions on their laptops and mobile phones. How the fire is remembered can be compared to how others remember similar tragedies.

Hillsborough seems to be the benchmark. A small number of fans appear to be outraged if the fire fails to receive a one minute silence at other clubs matches or saturation media coverage. There were even unsubstantiated reports of fans being berated for not joining in the applause in the 56th minute of last season's League Cup Final.

That aspect saddens me. We are not in some kind of grief competition with Liverpool or any other club. The events, and more importantly aftermath, of Hillsborough were completely different to what occurred at Valley Parade. There are very good reasons why Hillsborough has received such a high media profile. That tragedy has been kept in the public spotlight because it had unresolved issues and ones that had to be campaigned hard for. I have long been a supporter of the Justice campaign and I can only admire the tenacity of the victims families who have had to not only deal with their personal grief, but also have had to fight institutionalised attempts to smear the victims and avoid the truth of Hillsborough. I sincerely hope that they finally find the closure (such as it can be) they richly deserve.

As the rain fell gently upon us, and Phil Parkinson became the first City manager to make a reading at the memorial service, I was reminded that we have been lucky to have been able to deal with the fire in our own way. Sheltered from the mass media, Bradford quietly did its own thing.

Future generations will remember 11 May 1985 differently, that is inevitable. The fact that they wish to remember must be a good thing. We who were there on that terrible afternoon should not preach to them, but gently remind them of how, and why, we have chose to remember it.
Posted by bantamspast at 16:52