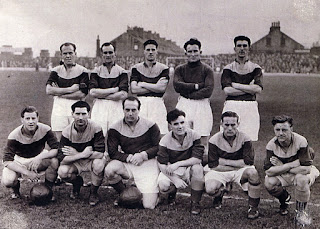 Former City player-manager Ivor Powell has died aged 96. A Welsh international midfield player, Ivor came to Valley Parade initially during the Second World War as a guest player when he was serving with the RAF as a physical trainer.

He returned to play and manage City between 1952-54. He made 83 appearances scoring 9 goals. Ivor also played for QPR, Aston Villa, Port Vale and Barry Town. He managed Port Vale, Bradford City, Carlisle United, Bath and PAOK. Born on 5 July 1916 he was given the middle name Verdun to honour the huge battle being fought at the town between the French and the Germans in the Great War. In his later life Ivor was awarded an MBE by the Queen. We remember the life of Ivor Powell 5 July 1916-6 November 2012.
In the image above, Ivor is on the front row, second left
Posted by bantamspast at 17:14