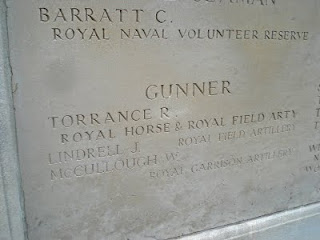 This year Remembrance Sunday falls on 11 November: the eleventh hour of the eleventh day of the eleventh month, when the guns finally fell silent in 1918 and on the Great War. Whilst we take a few moments to think of those who fought and died in conflicts around the world, here at bantamspast we particularly remember former players and supporters of Bradford City.

A roll call of the club’s supporters killed in conflicts is obviously impossible to collate. However, those who took part in this year’s trip to the Somme were particularly affected by the fate of the Bradford Pals. We visited the grave of Manningham born Arthur Greenwood, a private in the first Bradford Pals who was killed on the 1st July 1916 – the first day of the Battle of the Somme. Among his personal effects were several postcards of Bradford City teams, including those great FA Cup winners of 1911.

We will remember them.
Posted by bantamspast at 13:08