Once again we are delighted to be part of Black History Month in Bradford. Due to the relocation of the museum we are unable to stage a similar event to last year when Joe Cooke and speakers from De Montfort University were our guests. We are restricted to making an online contribution. The first of our articles begins with the forgotten story of Bradford Park Avenue’s Welsh international Eddie Parris. We thank Ian Hemmens for researching and writing the article.

These days, the sight of a coloured or even mixed race footballer is nothing unusual for fans at just about every level. Despite the recent incidents and regarding certain players over racial accusations, these problems are thankfully few and far between. That is not to say we should ever lower our guard and let the foul and disgusting bigotry gain the upper hand. Players of all colours and creeds add a wonderful diversity to our game which we should promote to the highest extreme. I think the last frontier to be crossed is the arrival in our game of a couple of home-grown lads of Asian descent to make our game fully proud of its diverse future.

Bradford as a city can be proud of its acceptance of a multitude of cultures from all over the globe. The city’s sports teams are no exception to this with Bradford City signing mixed race Scotsman Willie Clarke in 1906. 1911 also saw City sign Lithuanian born wingman Louis Bookman who had become a naturalised Irishman.

Across the city in Horton, the Bantams cross-city rivals Park Avenue took a chance on a young trialist in John Edward Parris, an 17 year old winger playing for Chepstow Town. Born near Chepstow in January 1911 to a white mother and a black father.

Eddie made his debut for Park Avenue in an F.A. Cup game against Hull City in January 1929 when he scored the teams only goal in a 1-1 draw. He went on to make 8 appearances that season scoring 4 goals. The following season 1929-30 he followed up with 16 appearances scoring 5 times. 1930-31 he appeared 13 times scoring 3 goals.

1931-32 finally saw him becoming a first choice pick in the Avenue side who were regular top half finishers and prolific goalscorers in Division 2. He appeared 36 times and finished as the club’s top scorer with 13 goals. No mean feat for a winger and he had a formidable partner on the other wing in future England International Albert Geldard, at one time the youngest ever Football League debutant.

1932-33 saw Eddie go even better with 15 goals in 39 appearances as Avenue finished in 8th place. 1933-34 saw Eddie maintain his place making 21 appearances and scoring 3 times before being hit with a serious injury. His place was taken by Tommy Lewis and he never appeared for the Bradford Park Avenue 1st team again.
His Avenue highpoint was to be the 1931-32 season which saw him receive an international cap for Wales against Northern Ireland in Belfast. A huge honour and credit to the Welsh selectors for their enlightenment in selecting Eddie when one considers the English FA’s treatment of the Plymouth Argyle Centre Forward Jack Leslie (below). 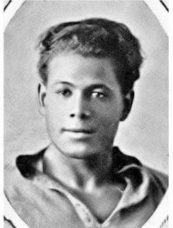 After several seasons as a prolific goalscorer with Plymouth Argyle, he received a call-up for the England national team. His manager Bob Jack told him of the honour and the town was thrilled for their hero. Somebody in the corridors of power must have then mentioned that Leslie was ‘a man of colour’ and his invitation was swiftly withdrawn. A scandalous act which obviously wouldn’t be allowed these days, but sadly indicative of the less enlightened times. It would be 1978 before Viv Anderson became England’s first black International. Here is Eddie with the Park Avenue team:

After he recovered, Eddie struggled to regain his place due to Tommy Lewis’ consistency and in the summer of 1934 he headed south to Bournemouth to continue his career. He remained at Dean Court for 3 years till 1937 saw him move on again to Luton for a 6 month stay before heading for Northampton.

At the outbreak of WW2 and now into his 30s, Eddie played for Northampton, Bath City and Cheltenham Town before ending his career. He worked in the munitions industry and after the war continued to work in the aeroplane industry.

He settled in the Gloucestershire town of Sedbury where he died in 1971, aged 60. 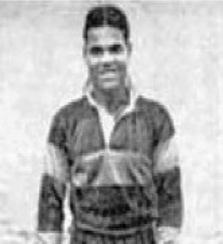