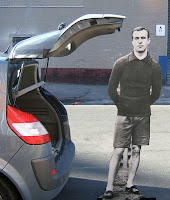 After a two year loan to Belgium the bantamspast museum’s life sized figure of Jimmy Speirs will be returning to Bradford in time for the new season. We loaned the cut out of Speirs and a framed picture of the 1911 FA Cup winning team to the Passchendaele Museum to mark the 90th anniversary of the Battle of Passchendaele in which 300,000 British and Commonwealth troops died – including City’s FA Cup winning captain Jimmy Speirs.
bantamspast’s David Pendleton is travelling to Belgium this week and will bring the Speirs figure home by train. We’d like to acknowledge Eurostar, National Express East Coast and Northern Rail for their support in getting the near six foot figure back to Bradford.
It is hoped that the graves of Jimmy Speirs and Gerald Kirk will be visited. As well as the inscriptions to Robert Torrance and James Comrie who have no known grave. Pictures of the trip to Belgium will appear here next week.
Picture shows Jimmy outside the museum before he set off nearly two years ago.
Posted by bantamspast at 08:10