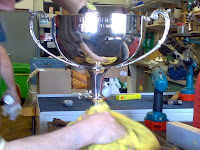 In his programme notes for the first home game of the season last year against Notts County (ironically our first league opponents this year, this time away), Dave Pendleton wrote: 'The Bradford derbies have a rich history, one that raged across all four divisions of the Football League. Given that friendlies against Halifax, Huddersfield and Leeds are now non-starters, thanks to policing bills and the like, I would like to see the Avenue game expanded into a mini-Bradford Championship involving a City XI, Avenue, Eccleshill United and Thackley. We have the Tom Banks Trophy, formerly played for between City and Avenue, in the museum and we would be delighted to make it available as the Bradford Championship trophy.'
As the Bantams are due to play Avenue again on Wednesday next at Horsefall (k.o. 19.45), we are making the trophy available once more. In the hope that it's taken up, we've given it a much needed clean.
Posted by bantamspast at 15:18