Myths and reality: A new series of books offering fresh perspectives on the history of Bradford football challenging the traditional version of events.

John Dewhirst (pub 2014, on sale in Waterstones)
Acclaimed by Hunter Davies as “the best illustrated history of any club I have ever read”, it provides an alternative history of the Bantams through surviving artefacts and memorabilia. Also includes comparative Park Avenue programmes and relics. 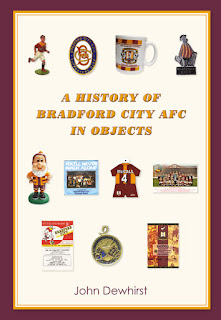 Jason McKeown (pub March, 2016)
The last 30 years of Bradford City have featured a rollercoaster highs and lows. From promotions, relegations, the Premier League, almost going bankrupt, reaching a major cup final, and becoming the pioneers of affordable football.
Featuring interviews with players, managers, directors, journalists and fans, RE-INVENTING BRADFORD CITY tells the inside story of how City emerged from tragedy in 1985 and evolved through modern times. How they have continued to reinvent themselves, in both good ways and bad. 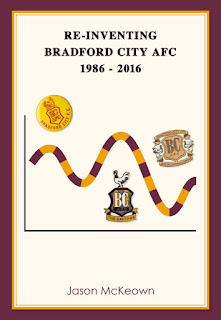 Room At The Top: The origins of Bradford football & the rivalry of Bradford FC and Manningham FC

John Dewhirst (pub June, 2016)
The story of all the pioneering clubs, the military heritage and the origins of claret and amber as well as the red, amber and black. The author’s research and analysis provides a new interpretation of the rugby schism of 1895 as well as the conversion to soccer at Valley Parade in 1903 and at Park Avenue in 1907. Above all it explains the antagonism between the two Bradford clubs which set the tone for the twentieth century relationship. 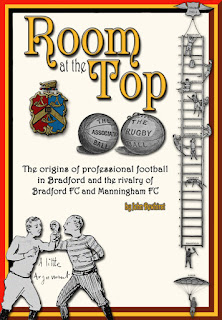 The final volume in the series, WOOL CITY RIVALS, an illustrated history of the twentieth century Park Avenue / City rivalry will be published in 2017/18
Further details from Amazon ;  widthofapost.com ; johndewhirst.wordpress.com
Join the mailing list and get subscriber details from glorious1911@paraders.co.uk
history revisited | bantamspast publications