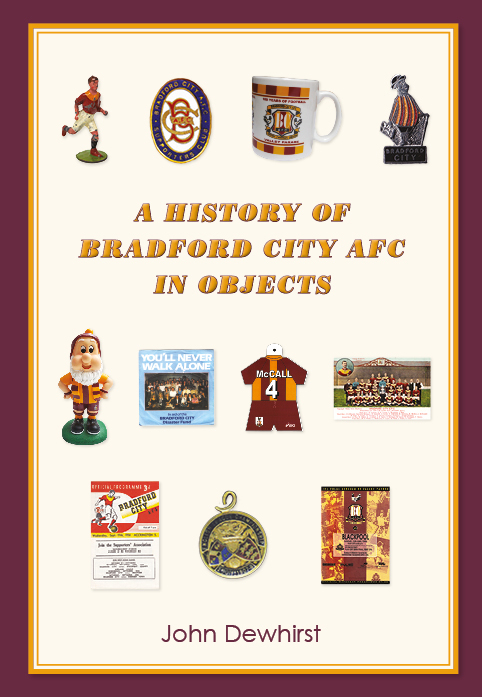 A unique 344, all colour publication which features more than 1,000 items of City memorabilia and historic club artefacts. It includes a 67,000 word definitive history of the club including the story of organised supporter groups at Valley Parade to the present day. The book provides an alternative history of the club as recorded by surviving artefacts and memorabilia and has been well received by football supporters not only in Bradford but across the UK.

Feedback reviews can be read on Amazon but also include the following comments:

Hunter Davies: 'Lucky old Bradford City - this is the best illustrated history of any club I have ever read. I am so envious of all John's football treasures and memorabilia, which will  appeal to and interest and amuse and fascinate all real football fans, not just those of Bradford City'

Simon Parker, Telegraph & Argus: 'a unique way of following the clubís path to the present day. I can't recommend it highly enough'

David Conn, Guardian: 'A History of Bradford City AFC in Objects, a new book by lifelong supporter John Dewhirst, appears not much more promising than a compulsive collection of memorabilia but it is much more than the sum of its badges, pennants and other ephemera which the author admits his wife and three daughters would eagerly de-clutter tomorrow. Any risk of appearing parochial is avoided by the care with which the objects are set out, the clean design and Dewhirst's detailed explanations. It adds up to a labour of love, testament to a cherished institution and the 111 years in which it has played.'

Tom & Dom of BANTAMS BANTER: 'the greatest toilet reading book of all time'

City supporters have also acclaimed it as possibly the best book published ever about the Bantams and it will appeal to fans of all ages.

Available from Waterstones, Wool Exchange and the club shop as well as Amazon, price £30.