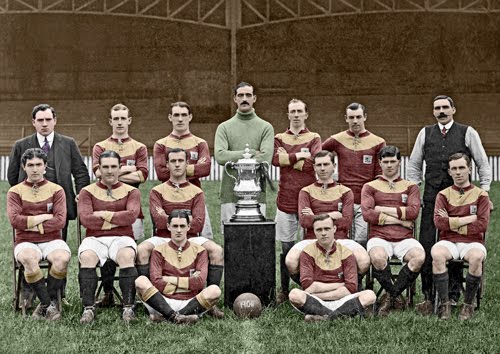 Ever since the success of the dinner that commemorated the centenary of Bradford City’s FA Cup triumph, the organisers of the bantamspast museum have arranged an annual dinner on 26 April, the date when Jimmy Speirs' headed goal won the famous trophy for the Bantams. This year the 103rd anniversary falls on a Saturday, so it is appropriate that the host venue will be Bradford City’s own 1911 Club.

The evening will comprise a three course carvery dinner and an after dinner speaker. The cost is, perhaps appropriately, £19.11. As we approach the centenary of the Great War, the bantamspast museum’s David Pendleton will speak about the impact of the conflict on the football club and will reveal plans in place to commemorate the centenary. Nine City players died in the war, including the captain and goal scorer in the FA Cup final Jimmy Speirs and the man-of-the-match Robert Torrance.

The dinner takes place on Saturday 26 April, 7.30pm for 8pm at the 1911 Club, Valley Parade. There are only sixty places available, so the event is expected to sell out. Tickets are available from the 1911 Reception.
Posted by bantamspast at 20:48