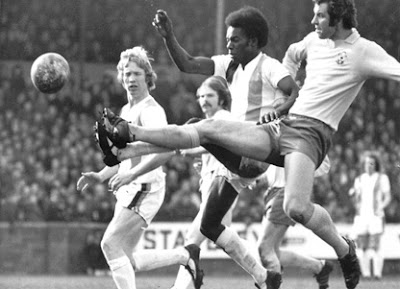 bantamspast museum is delighted to be once again supporting Black History Month in 2013. In 2011 we hosted a hugely successful event involving former City player Joe Cooke as well as speakers from the International Centre for Sport History and Culture based at De Montfort University.

Last year we were unable to host an event due to the relocation of the museum. On the morning of 26 October 2013 David Pendleton will be welcoming a Black History Month bus tour to Valley Parade where he will talk about the perhaps surprisingly long history of black footballers in Bradford.

The bus tour is being organised by the museum’s good friend Katherine Canoville. Entitled the Bradford African Caribbean Heritage Bus, it will take place on 26 October and will conclude Bradford’s Black History Month 2013.

The event will celebrate Bradford’s African & Caribbean Cultural Heritage, stopping off at key historical cultural and community sites within the Bradford District. The tour will visit sites associated with Bradford’s black community’s cultural achievements, scientific, artistic and sporting landmarks including: Billy Clarke, Bradford City’s first black footballer; Mary Seacole, who pioneered British Healthcare in the community; and hundreds of undocumented heroes and she-roes within the local district, who deserve to be put on the map.