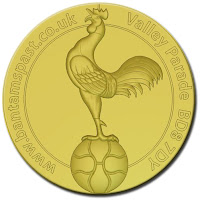 The inaugural Bantams’ History Week takes place in late April to coincide with the 102nd anniversary of Bradford City AFC’s FA Cup triumph, 26 April 1911. On that fateful day the Bantams became first winners of the current FA Cup trophy which, by a happy coincidence, had been designed by the Bradford jewellers Fattorini’s.

The history week is being organised by Bradford City AFC’s museum bantamspast. The ethos behind the event is illustrating the interaction of the history of the football club with that of the city centre. At various locations that overlapping, yet often forgotten, history will be brought back to life via displays, a self-guided walk and a tour.

The history week will culminate in a dinner at the Midland Hotel on 26 April - the anniversary of Bradford City’s FA Cup triumph. The dinner will take place in the same room from which the Bantams’ captain, Jimmy Speirs, showed the glittering trophy to a crowd estimated at 100, 000 people – a third of the entire population of the city at that time.

The programme for the week is as follows:

North Parade, historically one of the smarter streets in the city centre, has strong links with the heritage of Bradford City AFC. Baines Cards, producers of millions of collectors cards depicting sports personalities and clubs in the late Victorian and Edwardian periods, had its base on North Parade. Originally from Manningham, the company moved to North Parade as its business grew to staggering proportions. Featured on their cards were numerous players of Bradford City, Bradford Park Avenue and Bradford Northern. However, Baines also catered for a national and international audience and every conceivable sporting aspect was covered by their cards which were avidly collected by boys young and old.

From Montevideo to Manchester, Tokyo to Turin, today the appeal of football cards knows no bounds. Yet how many people are aware that this global obsession has its roots in Victorian Bradford? John Baines, a Bradfordian who shaped global football culture.

The sporting heritage of North Parade will be celebrated by a storyboard displayed on the walls of the Sparrow Bier Cafe. You will be able to toast that heritage with a pint of Baines Bantams’ Beer, specially produced and exclusively on sale at the Sparrow.

Undercliffe Cemetery
Otley Road entrance
2pm
Free event (donations welcome to the cemetery volunteers)
A guided tour of Bradford’s famous necropolis, including visits to the graves of former Bradford City chairmen Alf Ayrton and Stafford Heginbotham. We also pay our respects to Thomas Coyle, a 12-year-old boy killed when a barrier collapsed at Valley Parade on Christmas Day 1888. Although this event is free we would appreciate donations towards the work of the Undercliffe Cemetery volunteers and their efforts to maintain the huge cemetery.

Dress code: tie for gentlemen, dress for ladies is preferred, but smart-causal will suffice.

The culmination of the Bantams’ History Week is a dinner to mark the 102nd anniversary of Bradford City AFC’s FA Cup victory. The dinner will take place in the very room where Jimmy Speirs walked out onto the balcony of the hotel to show the FA Cup to an estimated 100,000 people packed onto the streets of Bradford.

Toasts will be made to the great team of 1911. Our guest speaker will be the Guardian’s David Conn. Well known for his investigative journalism into football’s finances, his latest book, Richer than God, tells the story of Sheik Mansour’s arrival at Manchester City and its impact on English football.

Spaces are limited to forty diners, so early booking is advised. Please send a cheque for £18 payable to bantamspast to:
bantamspast, PO Box 307, Shipley, BD18 9BT.
Bookings are strictly on a first come first served basis.
Throughout the Week, 20-26 April
Bantams’ History Week Trail
A self-guided walking tour of locations in central Bradford that are linked to the history of Bradford City AFC. As many of the attractions within the establishments listed, it may be worth double checking their opening times if you are travelling from outside the city.

Midland Hotel
Cheapside
Telephone 01274 733735
www.peelhotels.co.uk
When Bradford City won the FA Cup in 1911 they were met by 100,000 people on the streets of Bradford. Their journey from the Exchange station to the Midland Hotel took nearly an hour as nearly a third of the entire population of the city turned out to welcome the conquering heroes. Put yourself in the footsteps of those famous players and visit Bradford’s iconic former railway hotel. Adjacent to the front car park is a plaque celebrating the centenary of the FA Cup victory and the planting of one hundred trees by Britain in Bloom in March 2011. The Spirit of Bradford bar (turn immediate left on entering the hotel) has a fabulous illuminated mural of the city including a representation of Valley Parade.

Opposite the hotel was the now demolished headquarters of the jewellers Fatttorini’s where the present FA Cup was designed. It was first competed for in 1911 and the first winners were none other than Bradford City. Adjacent to Fattorini’s was Sports and Pastimes where the shirts that the Bantams wore when they won the FA Cup were designed and produced by the Fattorini owned company Sports and Pastimes. Bradford City’s England international midfield player Evelyn Lintott worked at the shirt manufacturers immediately following his transfer to Valley Parade.

Waterstone’s
The Wool Exchange, Hustlergate
www.waterstones.com
Situated in the magnificent Wool Exchange building, Waterstone’s will have a display of Bradford City, Bradford Park Avenue and Bradford Bulls books on show.

Bradford Cathedral
Telephone 01274 777720
www.bradfordcathedral.org
Open 0900-16.30 Monday-Saturday except Bank Holidays. Open Sundays for services only.
The Cathedral houses a plaque that commemorates the millions of pounds raised in the wake of the fire disaster at Valley Parade in 1985. The slate plaque can be viewed on the left hand side of the church as you approach the Alter. The Cathedral was also the place where Robert Torrance, the man-of-the-match in the 1911 FA Cup Final was married in late 1916. You will be able to view his marriage certificate complete with the great man’s signature.

Corn Dolly public house
110 Bolton Road
Bradford
BD1 4DE
Telephone: 01274 720219
Open daily 11.00-23.00
A popular pub with generations of Bradford City fans, the Corn Dolly has on display an oil painting of the Bantams record appearance holder Ces Podd and several other images. Also there is a pennant from Glasgow Rangers supporters presented prior to Stuart McCall’s testimonial match when City played Rangers in front of over 20,000 supporters.

Hamm Strasse Memorial
Hamm Strasse/Manningham Lane junction
In the wake of the fire disaster the people of Bradford’s twin town in Germany Hamm showed tremendous compassion and eventually donated the memorial that stands in Centenary Square. As a mark of appreciation the new road linking Canal Road with Manningham Lane was named Hamm Strasse. For many years only a small plaque told that story, but on the 25th anniversary of the fire a marker stone was kindly provided by the building suppliers Marshall’s. It was unveiled by the Lord Mayor of Bradford and the Burgomaster of Hamm.

Sparrow Bier Café
32 North Parade
Bradford
BD1 3HZ
Telephone: 01274 270772
www.thesparrowbradford.co.uk
Open Monday-Tuesday 11.00-20.00
Wednesday-Thursday 11.00-23.00
Friday-Saturday 11.00-Midnight
Sunday 12.00-18.00
A relatively new business, the Sparrow has become a popular watering hole for City fans on matchdays. Home of the launch of the Bantams’ History Week, you can read about North Parade’s links to the football club on a storyboard on the cafe’s walls. Also on sale, at least until it sells out, is the exclusive Bantams History Week ale – Baines Bantams’ Beer.
Posted by bantamspast at 16:00