Up for the Cup Edwardian Style 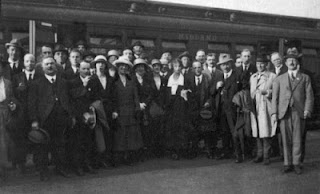 As travel plans are made for the League Cup Final, it is remarkable how similar the experience will be to our last appearance in a major cup final – the FA Cup Final of 1911. Although a large proportion of the 31,000 supporters heading south will be travelling by road, a significant number will use the railways. Thankfully, an overnight journey in toiletless carriages has been left behind us. For the team, they will, like their 1911 counterparts, travel to London prior to the day of the match. However, it is unlikely that they will be staying at the Midland Hotel at St Pancras. City fans with an eye to history could stay at the hotel, which has recently been spectacularly refurbished, but as well as an interest in history, they would have to have deep pockets, as the cheapest room is over £220 per night!

We take the following text from David Pendleton’s Glorious 1911 book, which is still available from Waterstones in the city centre and will be restocked in the club shop shortly.

To the Palace for the Cup

A staggering two hundred trains poured fans into London from all over the country. The Great Northern Railway, which served both Bradford and Newcastle, ran 43 trains into Kings Cross. Twenty trains, including one conveying the City team, ran into St Pancras on the Midland Railway. City had something of a special relationship with the Midland, not least because the company leased Valley Parade to the club. The Midland Railway Company’s carriage works in Manningham made a silver horseshoe, which they presented to the team. A large crowd gathered to witness the departure of the official party, including the fifteen players from whom the team would be selected, as they left Forster Square at half past three on the afternoon of Friday 21 April 1911. Driver Luck, who had driven the team’s train to the semi-final, was once again at the controls as the train pulled away from Forster Square, past Valley Parade and towards the distant capital. The great invasion of London had commenced a few hours earlier with the departure of the reserve team from Forster Square.

Eleven trains conveying some six thousand City fans followed in their wake. The streets of Bradford were busy all through the night. Streams of supporters made their way to Forster Square and Exchange stations. Along the route vendors sold claret and amber ‘favours’ that trippers placed in their lapels or attached to hats. As each train started, cheers went up and the fans began singing the popular City song ‘Hello Hello’ which echoed down the platforms as the trains departed into the night. The first train disgorged its bleary-eyed travellers onto the capital’s streets at half past four in the morning! The first team party arrived at St Pancras at quarter past eight in the evening. Waiting at the hotel for the team was a good luck horseshoe, sent by the men of Bradford’s Tramways. The team visited the Euston Empire Theatre, a short walk from their base at the Midland Railway’s fabulous St Pancras Hotel. Given the huge number of fans of both clubs arriving at St Pancras and the adjacent Kings Cross in the early hours, it may not have just been pre-match nerves that kept the City players awake in their hotel rooms above the great station.
Posted by bantamspast at 19:03