English Football Olympic Gold Medallist Harold A Walden aka ‘Harry’ was born 10 October 1887 in Umballa, India, the youngest son of Joseph and Annie Walden.  Joseph was serving with the 2nd  Cheshire Regiment.  They returned to live in Manchester in 1889.

In April 1902, aged just 14 ½ years he enlisted in the Cheshire Regiment as a ‘Drummer Boy’.  Whilst serving with the Cheshire’s he played in the Army vs Navy Football Tournaments.  Records of the actual teams haven’t been kept.  Stationed in Northern Ireland he played for Cliftonville FC and in 1911 played for Linfield FC in 6 games scoring 5 goals.


In October 1911, Harold now a Lance Sergeant decided to leave the Army and paid £25.00 to be released.  On his discharge he joined the newly formed Halifax Town Amateur Football Club.  Under FA rules of the day he was not allowed to turn professional for twelve months after leaving the Army.  His time at this club was very short as he made his debut for Bradford City FC on the 18th December 1911 against Notts County coming in for the injured O’Rourke.  He scored 3 of the 4 goals in the replay FA Cup round matches against QPR on the 18th Jan 1912.

He became City’s highest goal scorer for the 1911 -1912 season.  Playing in 17 matches and scoring 11 goals. The 19th October 1912 saw him Captain the bantams against Chelsea at Stamford Bridge.
Almost certainly, the highlight of his playing career must have been being selected to play for Great Britain at the 1912 Olympics in Stockholm, Sweden wearing the Number 9 shirt.  This tournament proved to be the pinnacle of his playing days.

Great Britain received a ‘bye’ in the first round, they then played Hungary winning 7-0, Harold scoring 6 of the 7 goals.  In the semi-finals they faced Finland.  Harold scored all 4 goals to beat Finland 4-0. The final saw them up against Denmark, playing in front of a crowd of 25, 000, including the King of Sweden, Gustav V.  Harold opened the scoring with a goal in the 10th minute.  Great Britain went on to win 4-2 ensuring them the Gold Medal.  Harold, ever the ‘livewire’,  is reported to have said “Thanks King” on receiving his medal. He still retains the record of ‘Highest British Goal Scorer’ and is the fourth highest on the list of ‘All Time Olympic Goal Scorers’, achieving 11 goals in the tournament. 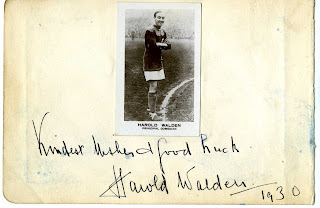 He continued to play for City although in 1913 he suffered with cartilage problems and finally had surgery in 1914 which delayed his enlistment during the First World War.  Harold re-enlisted in April 1915 in The Prince’s Own West Yorkshire Regiment (Bradford Pals) with the rank of Lieutenant. At Étaples, France in 1917, he again damaged his knee jumping into a trench. He was sent home and spent the rest of the war as acting Adjutant stationed in Hull.

Following the war years in 1919, he continued to play for City appearing in 12 matches, scoring four goals.  One of these matches was an away game at Arsenal on the 25th October where he scored two goals for the Bantams to win 2-0.  Arsenal was impressed and signed him for the rest of the1919/20 season!  He appeared in two League matches scoring 1 goal and four friendlies scoring 3 goals before returning to Bradford City where he was presented with a cheque (amount unknown).  Having made 57 appearances and scoring 25 goals for the Bantams, he retired from football.

In 1919 Harold made an appearance at a charity Lifeboat appeal at the Alhambra Theatre in Bradford playing the piano and singing.  This was to be the start of his new career!  Mr Laidler the theatre owner was so impressed that he signed him for a week’s performances on the variety bill.  Harold was a born humorist and life and soul of the party and was known for his antics on and off the field and stage.
Within two years he was topping the bills.  He toured extensively including Australia, China and India.  It was during a visit to Australia that he was pushed on stage to fill in for an ill comedian. His appearance was a roaring success so began his life of comedian.  He boasted that he was the only Music Hall Artiste to have appeared in the Olympics and won a Gold Medal!

His Bradford City days and Number 9 shirt became part of the act. The Gold Medal would be displayed outside theatres where he was performing.  He penned several pieces of music for the ukulele and wrote songs such as ‘Only Me Knows Why’. This became his signature tune and he also wrote ‘Ronnie the Robin’ and ‘Mother I’m a Soldier’ all of which were recorded on 78rpm vinyl. 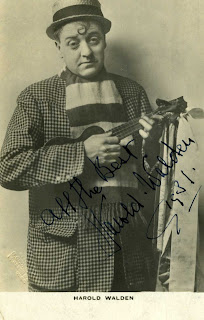 A minor film career was another string to his bow.  He played the lead role of ‘Jack Metherill’ in the 1920 film ‘The Winning Goal’ which was an adaptation of Harold Brighouse’s play ‘The Game’.  He also played himself on stage in his football shirt in the 1948 film ‘Cup Tie Wedding’. He became part of the famous Ernest Binns Arcadian Follies in the 1940’s. The 1930’s and 40’s also saw him having his own radio spots.

Sometime in the early 1950’s his Gold Medal was sold.

Harold died of a heart attack at Leeds Railway Station on 3rd December 1955 after returning from a charity performance in Harrogate to raise money for the Yorkshire Evening News Christmas appeal.  He is buried in Killingbeck Cemetery in Leeds, West Yorkshire.
The following is from his ‘Memories of A Comedian’ written for the Yorkshire Evening News published on the 30th January 1947.
“Folk often ask me which part of my life I enjoyed best.  Playing centre forward for Bradford City or being a comedian?  And to be honest I tell ‘em this: With football it’s 45 minutes each way.  Rain, snow or hail.  And at the end the crowd gives you the razzberry if they feel that way about things.  With Variety it’s only ten minutes each half.  With a two hour interval. And a benefit at the end of every week!” 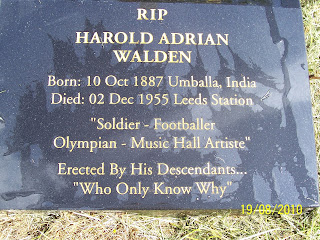