There’s Only One Harry Hampton!

When I was growing up as a Bradford City fan, the club’s history was passed down to me by the family elders with great pride. Stories of 1911 and the like were passed around the fireside on many a night. The great players: the Bonds, Torrances, Speirs, O’Rourkes and the rest. As I picked up my copy of Shoot magazine, or the like, there would be a potted history of a club each week and when it was Citys turn I already thought I knew all the important facts about my club but, a couple of things didn’t ring true.

It said that City’s most capped player was one Harry Hampton with nine caps for Ireland between 1910 and 1914. Nothing wrong with that, but by then I knew the FA Cup winning team off by heart and Harry wasn’t there so who was he? He must have been a decent player to gain international caps yet he wasn’t in the Cup final team. Could he have been injured or suspended and then left out as the star winger Dickie Bond was? Surely such an important player would be an integral part of the team? Imagine my confusion when it also said he also played for Aston Villa and had won several medals with them? How could we leave this lad out?

A couple of weeks later it was Aston Villa’s turn for the potted history and under the famous players was Harry Hampton, an ENGLISH international! This was getting really confusing now, and for many years the misinformation continued either through confusion or lazy journalism. To set the record straight, Villa’s Harry Hampton was three years older was indeed a great English international. He did win many medals with Villa and was, and still is, rightly regarded as a true Villa great.

As a Bradford City fan, our Harry Hampton interests me more. His career was far more modest by comparison but I think he deserves recognition in his own right, after all he held a club record for the most international caps for over seventy years until it was broken by Jamaican Jamie Lawrence in the 1990s.

Henry Hampton was born in Dublin, Ireland, one of six children to Henry Hampton Snr. and Ellen Manders. Henry Snr. was in the British Army and after his discharge he went to America where he met Ellen Manders in Illinois. Two children were born there before the family returned to Dublin and then to Scotland. Sadly, Henry Snr. died and left his widow with five children. She applied for poor relief, but had to give up two children to the Mossfield Industrial School. Glasgow was no place for a widow with a large family. These were schools that fed and educated poor children and tried to keep them on the straight and narrow. Sport was a major part of their education and young Harry must have shown promise as a footballer as according to family history he was taken on as a trainee at Glasgow Celtic. Celtic would have tried many hopefuls from the huge Irish Catholic population in Glasgow and, although he didn’t make it at Parkhead, he must have caught the eye whilst playing probably junior football as he was signed by Dundee FC.

Dundee at this time were a top side twice finishing runners-up to Celtic in the league and winning the Scottish Cup in 1910, so the young Harry understandably found it hard to make his mark at the club. Someone had noticed him though. When Bradford City’s England International half back Evelyn Lintott suffered a lengthy injury, City’s wily Scottish manager Peter O’Rourke used his extensive knowledge of the game north of the Border to bring the 22 year old Harry Hampton to Valley Parade. 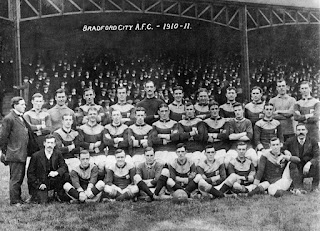 Several players had been tried before Harry got his chance in the away fixture against Sheffield Wednesday in March 1910. The game was lost but Harry impressed enough to keep his place in the side until the end of the season. The following campaign would turn out to be the most momentous in the history of Bradford City; the glorious 1910-11 season. Lintott was still suffering from his long term injury and Harry managed to start ten of the first fourteen games and was paired with the versatile James Blair. An injury then meant he lost his place to a certain up and coming Robert Torrance and the muscular signing from Rangers David Taylor; both destined to be members of City’s cup winning side. Such was their consistency, and the moving of Jimmy McDonald to the half- back spot, that Harry was to remain a squad player for the rest of the season. Taylor was moved with great success to left back to cover the illness of Scottish international George Chaplin who had contracted TB and was out of the game for around two years.

One bonus for Harry was his selection for the Irish national team for the Home International fixture against Wales on 28th January 1911. He kept his place for the games against England and Scotland in the series and although all three games were lost he had made a step up to international football. He only played three more league games as the City team concentrated on winning the FA Cup. He did appear in the second round tie against Norwich City at Valley Parade, but then let Jimmy McDonald back in for the rest of the cup run.

The following 1911-12 season came with City one of the country’s leading teams in the wake of the FA Cup win and the strong fifth place in the league; which could have been better but for the resting of players for the more prestigious FA Cup competition. Harry managed a creditable thirteen appearances plus two FA Cup games as the deputy for the ever dependable stalwart George Robinson as the club tried valiantly to hold on to their prized trophy. He also gained two further caps for the Irish team being selected for the Wales and England games.
The following season saw a further eleven appearances for City, once again deputising for George Robinson at half-back and he was also an ever present in the year’s home internationals, appearing in all three games for the Irish team. 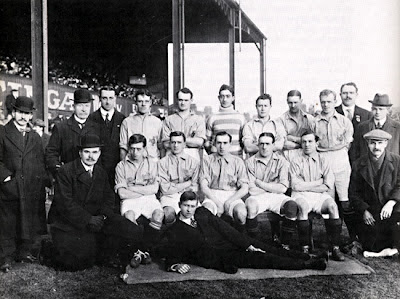 Above is a photograph of the Irish national team, Harry is stood left hand side on the back row next to the suited gents. Interestingly, this picture has two other City connections: with flying winger and FA Cup hero Frank Thompson seated on the front row far right; the keeper in the hooped shirt was the somewhat eccentric Fred McKee who made one single appearance for City on New Year’s Day 1912 at Liverpool. He won many honours for both Linfield and Belfast Celtic. The following year saw Harry make only three appearances as his squad place came under threat from John Brennan and the young highly promising Joe Hargreaves. He also made his ninth and final appearance for Ireland. Although aged only twenty six, injuries were taking their toll and, with his place in the City squad coming under threat, Harry decided it was time to move and he went to Ireland to sign for Distillery in May 1914 just as the world was on the brink of war. He married Elsie Knight in Bradford and they had a daughter Caroline Edith, but he left them in Bradford as he tried to continue his career over the water. He managed seven games for Distillery before war broke out and he returned to Bradford where he worked for the Labour Corps. He also managed one final game for City in late April 1916 during a wartime league game against neighbours Leeds City. He continued his war work until 1919 when an old knee injury caused him to quit. Bradford City still held his registration and had retained an insurance policy in case of such an injury. After the war in 1919 he was discharged from Clipstone camp and set up home in Derby, never returning to Bradford and leaving his wife and child behind.

He started a new family in Derby which produced twin girls and a boy. I can’t say, or judge, what made him do this but after the carnage of the war was anyone thinking straight in those days? He lost two Brothers in the conflict, he had seen several playing colleagues killed in the horror of the trenches, he would have heard of the horrors of team mate Dickie Bond being a P.O.W. and Jock Ewart being gassed. Who knows how the horrific war affected anyone. These are just facts, not an excuse, I am not privy to his thought processes.

Whilst in Derby where he found work with the electricity board. His playing days were over and such was his plight that he sold several of his international caps just to make ends meet. Remember this was a time where the whole country’s infrastructure was having to come to terms with losing a whole generation of young men, not to mention the economic cost of five years of unforgiving warfare. He continued to live out his days in Derby until his death in 1946 from lung cancer and heart failure

His legacy was one of a young boy brought up in very hard circumstances and making something of himself. He managed to rise to the top of his chosen profession only to be hit by the tragedy of the generation he was born into having to face the horrors of the Great War; it surely had an affect on his way of thinking.

He was a part of a squad playing at the height of the English professional game for one of the top clubs of the period. Not only that but for almost four years he was a regular Irish international side when they were home international Champions for the first time. His record of nine caps whilst a City player was a record which stood for almost seventy years until finally broken by the hugely popular Jamie Lawrence and his caps for Jamaica.

Aston Villa may have had their Harry Hampton, but we at City had our own Harry. He may not have been a huge household name but he was a significant part of the club in its Golden Era and his story is here for all to see. Can I credit, and say a huge thank you, to Mrs Christine Duttine for her massive help and assistance in this piece. She is a member of the Hampton family who also wanted Harry’s story to be told and I am glad to be of help.

I would also like to thank Christine for her kind loans of family documents and information and the picture of Harry’s Irish Cap which happily remains with the family to this day.
Ian Hemmens
Posted by bantamspast at 16:13