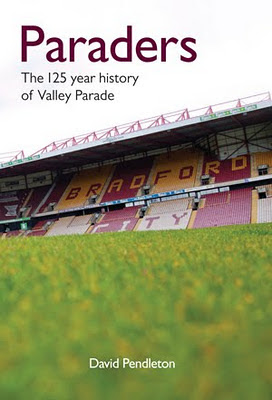 The official launch of a new book which celebrates the 125 year history of Bradford City AFC’s Valley Parade ground will take place at Waterstones at 6.30pm on Thursday 8 December. Entitled ‘Paraders, the 125 year history of Valley Parade’, it has been written by David Pendleton, curator of Bradford City’s bantamspast museum and author of the critically acclaimed book Glorious 1911.

Paraders tells the story of the Bantams’ home from its inception as a rugby ground in 1886 right through to the present day. From the fire disaster of 1985 to the FA Cup winners of 1911; the brief Premier League sojourn to all too many years in the basement division of English football. The full sweep of the history and development of Valley Parade is captured. Scores of previously unpublished images enhance the painstakingly researched text. Even the most dedicated Bradford City supporter will learn something new from this comprehensive history.

Paraders is much more than a history of a football ground. It touches on the social, industrial and demographic changes that have shaped the wider city of Bradford over the last 125 years. Priced at just £16 the book will appeal to even those who do not make the fortnightly pilgrimage to Valley Parade.