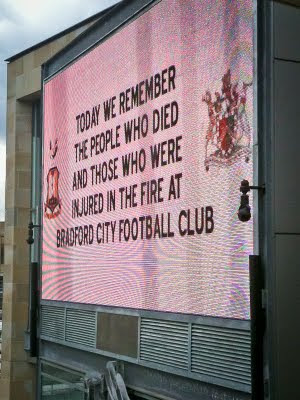 In the wake of the club’s lowest position in the Football League since 1966, and the ongoing debate as to whether Bradford City will continue to play at Valley Parade, the 26th anniversary of the fire disaster was a timely reminder and it helped to place the club’s current travails into perspective. As the flowers were piled around the memorial to the 56 fans who died on 11 May 1985 I did wonder whether Bradford City could ever leave Valley Parade while the generation who survived the fire remain active supporters of the club?

Of course, time and tide wait for no man and come 1 July 2011 there will only be a smattering of the curious and historically aware, gathered at the memorial to the Bradford Pals, to mark the anniversary of the Battle of the Somme. On that single day over a thousand young Bradfordians were mown down by machine guns and artillery fire on the blackest day in Bradford’s history. Yet less than a century on the anniversary will pass largely unnoticed. One day the Valley Parade fire will slowly fade into history, but the tears that were shed during the soft singing of ‘Abide with me’ illustrate that our disaster is still raw in the memory.
Posted by bantamspast at 13:01