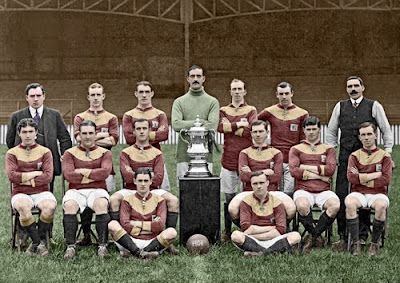 Tuesday 26th April 2011 is the centenary of Bradford City’s greatest feat: the winning of the FA Cup. A club only eight years old, having already established itself as one of the top five clubs in the country, won the greatest and most coveted prize of the age. It was an achievement almost without parallel.

Designed and produced by Bradford company, Thomas Fattorini, the current trophy (the third) was first presented to Bradford City captain, Jimmy Speirs, after the team's 1-0 victory in a replay against Newcastle United at Old Trafford, Manchester (itself then only a year old, thus its first big fixture) on 26 April 1911.

The celebrations for this significant footballing event reach a climax today when the trophy will be coming home to the city of its creation.

From 11am to 3pm it will be on display in front of a life-sized display of the team image above, as part of the exhibition When the FA Cup Came Home at Bradford Industrial Museum. Also on display are six of the players' winning medals, two shirts from the final, the original Fattorini hand-drawn design for the trophy and much more.

Skipton’s Aireville School are welcoming representatives from Bradford City, bantamspast museum, the Yorkshire Regiment and the PFA. A replica of the FA Cup will be at the school and pupils who are undertaking a pilgrimage to the battlefields of the Great War, including the final resting place of Jimmy Speirs, will be presented with replica shirts from the Edwardian era.

A centenary dinner will take place at the Midland Hotel during the evening. The FA Cup will be at the hotel exactly one hundred years to the minute when the Bradford City players returned from Old Trafford to the Midland itself with the Bradford designed FA Cup. Speeches and toasts will be made over the course of the evening.

Many players from Bradford City’s FA Cup quarter final of 1976 will be in attendance (incidentally, it is 35 years since that remarkable achievement) as well as representatives from Bradford City. Finally, Stuart McCall, one of few former City players who have appeared in both the English and Scottish Cup Finals, will be one of our most honoured guests. It will be an evening to remember and a commemorative programme will be on sale. The dinner itself is a complete sell out.
Posted by bantamspast at 06:31