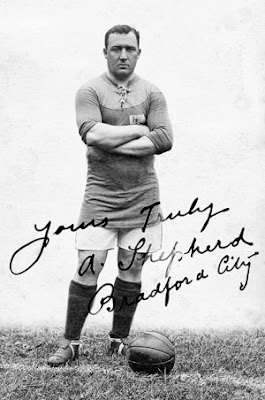 In the summer of 1914 Bradford City spent heavily on a forward line to compliment a defence that was widely recognised as being the best in the Football League. It should have been the start of a new exciting era. However, the outbreak of the Great War ruined any chance of the club firmly establishing itself among the elite of the game. Had the war not come City would have probably added to their FA Cup triumph of 1911 and pushed for the league title that had eluded them on several occasions.

One of the forwards signed was Albert Shepherd from Newcastle United. By December 1914 he was beginning to form a formidable partnership with Oscar Fox. In that month Shepherd scored seven times in four games. These goals included a hat-trick against West Brom on 19 December. Sadly, only 5,300 saw the game; the war was frustrating City’s well-laid plans.

The 1914/15 season was Albert Shepherd’s only campaign for the Bantams. He scored 12 goals in just 26 appearances. He retired during the Great War. One can only wonder as to what might have been.

Great picture, not seen that one before, only as part of a team. Shepherd was due to lead the Newcastle attack in the 1911 Cup Final but was injured the week before i think!