Celebrate Christmas with One in a Million and bantamtamspast 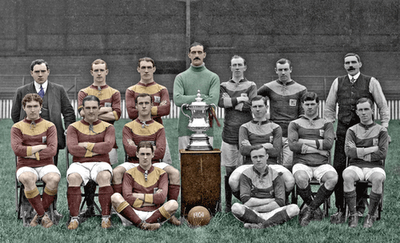 One in a Million invites you to celebrate Christmas and bantamspast with a festive event and book signing.

The event follows the launch of a new book by the co-curator of the bantamspast museum, Dave Pendleton, and will see copies of his book ‘Glorious 1911’ on sale and an opportunity to have it signed by the author.

“Bradford City's ascent to the upper reaches of English football within a few years of formation was quite remarkable and the period immediately preceding the First World War has remained the pinnacle in the club's history. GLORIOUS 1911 and Bradford City’s Golden Age, 1908-15 tells the story of the Bantams' campaigns in the first division and the legendary FA Cup winning season of 1910/11.

It provides background on the personalities of that time as well as the major events and also examines the reasons for the club's change of fortune when peacetime football resumed in 1919. GLORIOUS 1911 and Bradford City’s Golden Age, 1908-15 is the product of extensive research by author Dave Pendleton with input from two other writers with considerable knowledge of the club's history, David Markham and John Dewhirst.

Additionally it features a wealth of long-forgotten images and archive material to provide a unique insight into a fascinating era.”

To get everybody in the Christmas spirit, a festive menu will be available from the Bantams Cafe and Christmas music will be played.

A presentation will also be made by bantamspast.

Lenny the City Gent will also be making an appearance and Bradford City Supporters Trust will be offering FREE membership which gives an immediate 10% discount for use in the Club shop.

Everyone welcome. Admission, as always, is free.
Posted by bantamspast at 20:11