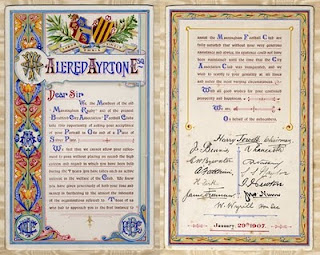 Mary Needham, granddaughter of Bradford City’s first chairman, Alfred Ayrton, will be an invited guest at Valley Parade for Bradford City versus Oxford Utd on Saturday 30th Oct. At the age of 79, this will be Mary’s first ever visit to a football match.

Mary recently donated a magnificent illuminated silver presentation case to Bradford Museums and Galleries. This presentation case was given to her grandfather when he retired as Bradford City chairman in 1907 along with his portrait painted in oils. The solid silver case was made by Fattorini of Bradford and was signed by board members at the time including Harry Jowett (chairman), A Fattorini, A Lancaster and others.

David Pendleton will give a talk on Alfred Ayrton’s significance to the club before the game in the bantamspast museum at 2pm. Mary will be in attendance between 1:30 and 2:30pm to meet fans and hear the talk about her grandfather. Alfred saved Manningham Rugby Club from closure when he became their president in 1900. He later drove through the conversion of Manningham Rugby Club to football and the birth of Bradford City. The illuminated case was given on the occasion of his retirement as Chairman of Bradford City on January 29th 1907.

As usual, admission to the presentation is free and everyone is welcome.

Mary will then be watching her first football match and meeting the present chairman, directors and fans.
Posted by bantamspast at 20:41