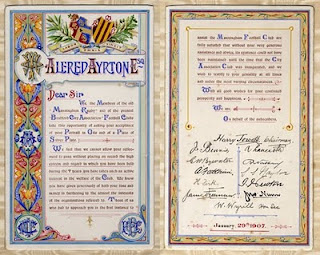 The bantamspast research teams have been encamped in Bradford Central Library for a number of weeks now! Our thanks to Chris Ambler for his painstaking investigations into the life of Alf Ayrton, Manningham Rugby Club’s last chairman. Alf Ayrton was the man who drove through the switch from rugby to football in 1903, became Bradford City’s first chairman, steered the club through the potential merger with Bradford Park Avenue and them laid the ground work for the club to become a limited company in 1908.

His contribution to the history of Bradford City was immense. He saved Manningham from closure in the early 1900s, held the first meetings with those interested in forming a professional football club in Bradford and he even coined the name ‘Bradford City’. He then helped establish the club in its early days and set it on the road to success. Indeed, when he retired in 1907 the club was on the verge of promotion to the top flight after only five years of existence. He was held in such esteem that when he retired he was presented with a magnificent silver illuminated address (above), now safely in the care of Bradford Museums and Galleries, and a painting which is hung in the bantamspast museum. Alf was later the first chairman of the Bradford City Supporters’ Association, whose minutes we have had transcribed and hope to make available digitally.

Alf was born into a family with strong ties to Manningham. His father was Manningham born solicitor John Ayrton. Alf was born at Brighouse where the family had moved from its previous home of Heaton. Alf began work as a woolstapler's assistant. By the age of 28 he was a woolstaple buyer and lodging in London. However, he was already married and had a family home at Whetley Hill. The Ayrton’s later lived at 73 Ashwell Road, Heaton and then 7 Selbourne Grove, Manningham and, by the outbreak of the Great War, 37 Blenheim Road, Manningham.

Alf became a wool merchant and ran his father's firm, a wool merchants, combers and top makers, at West Brooke Mills, Shearbridge Road. The family shared the losses of all too many Bradfordians during the Great War when Alf’s son John died of wounds received at the Battle of Loos on 29 April 1917. He was a second-lieutenant in the 1st West Yorkshire Regiment.

After the death of his wife Harriet in 1928, Alf moved in with his daughter at 3 Jesmond Avenue, Heaton. In the 1930s he followed the path of many retiring Bradfordians and moved to 68 South Lane, Bare, Morecambe. Sadly, he was killed after being struck by a car during the blackout in the early days of the Second World War on 29th November 1939 aged 76. His body was returned to Bradford and he was buried alongside his wife at Undercliffe Cemetery.

We are hoping to invite Alf's granddaughter as guest of honour to a special presentation on the life of Alf Ayrton before the end of the season. Watch this space!
Posted by bantamspast at 19:11