Forthcoming Events and Thanks 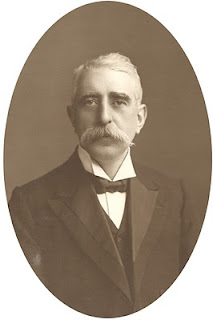 The museum would like to offer our sincere thanks to City fan Steve Whittaker who has made another generous donation to the museum funds. As is well known, the museum receives no direct funding and is reliant on donations and the work of its volunteers, so every penny we receive is vital and extremely welcome.

We are planning an event to celebrate the life of the first chairman of Bradford City Alfred Ayrton (pictured right). His granddaughter recently donated a magnificent illuminated address that was presented to her grandfather when he retired as City chairman in 1907. The illuminated address is housed in a solid silver case and has therefore been signed over to the Bradford Industrial Museum. At the forthcoming event we will have the address on show for the first time since the centenary exhibition in 2003. David Pendleton will give a talk on Alfred Ayrton’s significance to the club. He saved Manningham Rugby Club from closure when he became their president in 1900. He later drove through the conversion to football and the birth of Bradford City. Alf negotiated, and later became an active opponent of, the proposed merger with Bradford Park Avenue in 1907. In the 1920s he became president of the Bradford City Supporters’ Club and remained a committed fan until his death. We will announce the date of the event shortly.
Posted by bantamspast at 08:12