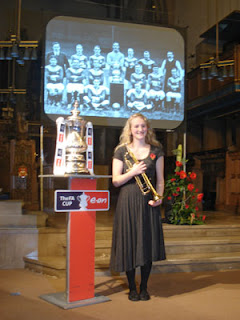 Our event Finding Robert Torrance, held at Bradford Cathedral, which remembered the nine City players killed in the Great War, was a resounding success. A good turn out of people saw the early history of the club explained against the background of the lives of those nine City players. In a dramatic closing sequence, the names and images of the nine players were shown in complete silence. Then a moving rendition of the Last Post was played by Lucie Sanderson. It was a fitting event, coming as it did on Armistice Day, 11 November.

Our thanks to all involved, particularly Glyn Watkins, Mark Neale, Lucie Sanderson and the staff of Bradford Cathedral.

Picture shows Lucie Sanderson, the FA Cup and the 1911 Cup Winning Team.
Posted by bantamspast at 16:12