The support of the people of the German town of Hamm in the wake of the fire disaster was one of the positive things to emerge from the blackest day in modern Bradford's history. Hamm, of course, provided the memorial that still stands in Centenary Square and it provides the centrepiece for the annual commemoration on 11 May. In recognition of the support of the people of Hamm the new ring road that joined Canal Road with Manningham Lane was named Hamm Strasse. 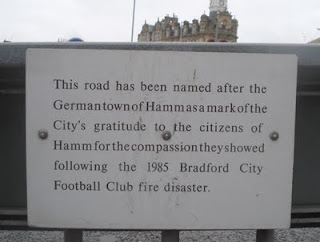 Today, only a couple of small plaques reminds people of the link with the fire disaster. With the twenty fifth anniversary of the fire due in May, David Pendleton of the bantamspast museum thought it would be fitting if the road was rededicated. With the aid of Councillor David Ward the idea of a re-dedication, and a new marker to remind passersby of the kindness shown towards our city by the people of Hamm, has moved closer to fruition. On Thursday the two Davids met Bradford City Centre managed Bob Parker who has offered his support to the scheme. Bob is now pricing up differing sizes of a stone marker which it is hoped will stand at the junction of Hamm Strasse and Manningham Lane.

It is expected that the new marker will be in place for 11 May 2010 and we are looking to invite local dignitaries from Hamm to rededicate the road during the early afternoon of the twenty-fifth anniversary.
Posted by bantamspast at 20:52