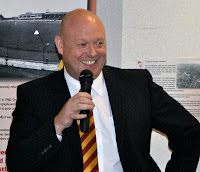 Dave Baldwin opened by stating that City’s position was to remain at Valley Parade and correspondence had been opened with the ground’s owner Gordon Gibb. However, with overheads of £1.2m per year at Valley Parade unless the ground could be bought, or the rent reduced, then quite clearly the club would have to seriously consider Odsal if the Sports Village went ahead. David Baldwin revealed that the club had already talked to the Council and had raised issues such as rent, revenues from advertising, corporate revenues, access to Odsal Stadium on non-match days, besides much else. He reiterated that those talks were very much letting the Council know the club’s issues, but Valley Parade remained the number one choice for the club’s future. 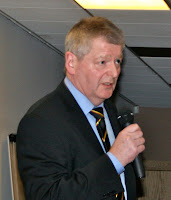 Peter Hood explained the concept of the Odsal Sports Village (OSV) as a venue for a host of sports and said repeatedly that it was not just about getting a new stadium for the Bradford Bulls. For example he wanted fans to envisage a Richard Dunn’s three times its current size. He said that City would be welcome as partners at the OSV and had no doubt that ground sharing could be made to work. Answering questions about what would happen if the OSV failed to materialise, he said that the Bulls would try and make a go of Odsal themselves, but would also have to consider Valley Parade. The Super League was moving forward rapidly with new facilities. Hull, Huddersfield, Warrington and Wigan had built new grounds. Leeds were improving Headingley, St Helens are building a new ground and Castleford are at the planning stage. Clearly, the Bulls would be left behind if Odsal remained in its current state. 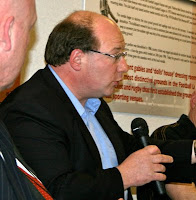 Adrian Naylor defended the Council’s pledge of £15m to the OSV saying that it would host a huge number of sports and that 5,000 student athletes would live at the village. It would offer ordinary Bradfordians the chance to train alongside some of the best athletes in the country. He also said that the £15m would attract match funding from many other sources. However, he revealed that they were very much at the planning stage and that no concrete plans had yet been laid. 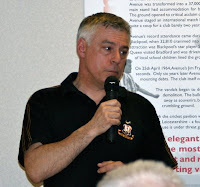 David Ward, whilst fully supporting the OSV concept, wondered whether it was wise for the Council to fund a project that might potentially take City away from their traditional Manningham home. City play a huge part in bringing thousands of people into the city centre every other Saturday and are a central plank of the Manningham Masterplan – in which incidentally City now play an official role. What would it say about social cohesion if City left Manningham? He ended by saying he had huge concerns about what would happen to Valley Parade itself if City went to the OSV? The thought of it lying derelict and vandalised was inconceivable. David Warburton hoped that both clubs could find a way of remaining at their traditional homes. However, he fully supported the OSV and revealed that he had even once played at the ground and later had manned the old scoreboard for Northern matches.
When the debate was thrown open to the floor, unsurprisingly a lot of fans wanted to ask David Baldwin about purely City related matters. David reassured fans that the club was committed to Valley Parade, but he had to explore all avenues and if an option became available that could reduce the club’s overheads, then he would be duty bound not to ignore it. He said that he was pleased that the club, Bulls and the Council were involved in an open and honest debate. He wanted the Council to fully understand City’s position. He wanted to build a better relationship with them and get away from the two bodies only speaking to one another when the club was facing a financial crisis.
Peter Hood was asked about where the Bulls would play during the OSV build stages he said he had already spoken to Julian Rhodes and expected that the Bulls could be playing at Valley Parade for two years whilst the OSV was being built.
David Baldwin suggested that the OSV be built as a multi-sport and training venue and that the option of building a new ground be deferred. The Bulls could share Valley Parade and once the OSV was up and running then a proper evaluation of whether a new ground was needed at the OSV could be taken. His preferred option was for a top class multi-sport and training venue at Odsal, but with Valley Parade as the focus for professional sport in Bradford. It would save a huge amount of money at the OSV and would allow even more to be spent on the new Richard Dunn’s and other athlete training facilities. After all, a virtually brand new stadium already existed at Valley Parade.
In the end though it was all about economics, the better the balance sheet the more money the club could give to the manager. In a stark message he said that currently 6,000 season tickets had been sold for next season, if the remaining 4,000 people who currently have season tickets for this campaign don’t renew then the playing budget for next season would be cut by £600,000. He wanted everyone in the room to go out and convince those who had not renewed to do so. He accepted that it was tough given the current run of results – and he had suffered with the fans at Rochdale, Exeter and Bournemouth – but it was vital for the long term success of the club. If the fans walk away now, the job of returning the club to a higher level would be all the more difficult.
Posted by bantamspast at 10:55