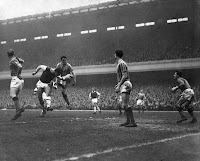 This weekend's FA Cup 4th round gives us an opportunity to show another of our newly acquired images and remember a time when City's involvement in the competition went beyond the second or third round.
It takes us back to January 6th 1962, when the Bantams faced the mighty Arsenal at Highbury. Former T&A City correspondent, David Markham, takes up the story by describing the career of City goalkeeper Mitchell Downie: "Mitchell was a spectacular, acrobatic goalkeeper who originally came from Scotland to play at Park Avenue in 1950 and joined City after spells at Lincoln and Goole. He spent four years at Valley Parade - 1959-1963 - before ending his career with Doncaster Rovers. I remember the Arsenal game very well. It was a third round FA Cup tie in January 1962 and I joined a special train run by the T&A. We set off at 7am and the £6-plus cost included breakfast and evening meal. The T&A arranged for 400 copies of the Yorkshire Sports to be delivered to the train when it stopped at Doncaster so we could read a report of the match on the last stage of our journey home. It was a great day out. City didn't disgrace themselves, but were comfortably beaten 3-0. They were in the Fourth Division then and, after the cup defeat, they had a great run to the end of the season before missing out on promotion by one place - four teams were promoted and they finished fifth."
In the picture, Mel Charles, Arsenal's centre-forward (second left) beats Downie, Bradford's goalkeeper and Storton, Bradford's left-back, to score Arsenal's second goal. The ball is completely covered by Storton.
Posted by bantamspast at 09:24

This was the first professional football match I ever saw; 50 years ago this week.

Any information of the players that day ?