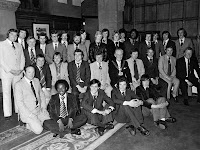 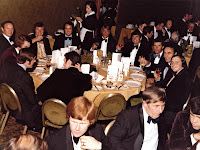 The second was taken at an FA dinner in London at The Royal Lancaster Hotel. Pictured are Bill Roper, Bob Martin, John Garside, Rod Johnson, John Napier, Bernard Ellison, Bryan Edwards, Terry Newman and others.
thanks to David Markham for the names. If you know any of the missing ones, please drop us an email or comment.
Posted by bantamspast at 17:43

Can confirm Ronnie Barritt 3rd from left/back row. He was my uncle.

Thanks to Antony and Keith for clarifying names in the first image.