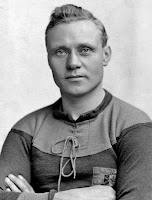 Your team is top of the Premier League, but with the FA Cup on the horizon several top players are rested from vital league matches. Today, it’s unthinkable, but that is exactly what Bradford City did for several seasons in the years leading up to the Great War.
On 1 January 1910 City were sitting proudly on top of the First Division. The Bantams had scored twenty-five goals in just ten matches. New Years Day brought Manchester United to Valley Parade. Star striker Bob Whittingham had been playing for some weeks with a niggling ankle injury, so with the upcoming FA Cup tie in mind he was rested. The 25,000 crowd (incidentally over twice the size of the attendance at Old Trafford) had little to cheer as the two sides played out a tame contest on a mud bound pitch. City went down by two goals and it marked the start of a run of four league games when City failed to score. The sudden loss of form coincided with several injuries to key players.
The first round FA Cup tie against Notts County was switched to Valley Parade after City paid County £1,000. Fifty men were employed to clear snow off the pitch and then protect it with 50 tons of straw. Despite the fact that admission prices had been doubled, excursion trains ran into Bradford from Carlisle, Morecambe and Sheffield. R. Gregson, one of the England selectors, was at the match to run his eye over Bond, Lintott and Whittingham.
A muddy pitch spoiled the match and it wasn’t until County’s Cantrell was sent off that City found form. They scored twice within ten minutes of the dismissal to take control of the tie. Dickie Bond (pictured) did his England prospects no harm by scoring one of City’s four goals.
The second round brought with it heavy snowfall. The pitch was cleared, but this time all the loose slush and sand was removed. It was said to be as flat as a billiard table, albeit almost devoid of grass. With prices at near normal levels 28,000 witnessed the tie with Blackburn Rovers. It was a tight affair, but the Rovers forwards always had the edge. Though Frank O’Rourke scored for City, the home forwards rarely found the space they needed and were well marshalled all afternoon. City lost 2-1 and O’Rourke suffered a knee injury that was to keep him out for three weeks.
City ended the season in seventh place, respectable by any standards, but the fact that they had led the pack at the turn of the year, and had been in such fine form, caused one or two grumbles. However, the policy of resting players from league matches caused little or no comment.
The following season City would once again sacrifice their league position for cup glory. That year was 1911, when City won the FA Cup. The league title was at one point within their grasp, but the cup took precedence. Today we would sacrifice a cup run for promotion from the fourth tier of English football, how times change!
Posted by David Pendleton at 23:27